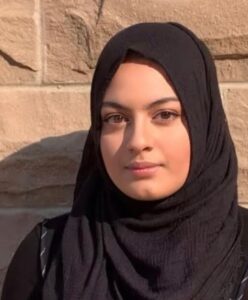 Graduated 2014. In my time at Hadi School, I never was the brightest or the smartest; however, I do know that I was and am academically competitive. For instance, in the fifth grade, we were put into groups for reading. One group was more advanced than the other.I was put in the lower group. I wasn’t discouraged but rather realized I had a goal. I worked the next couple of weeks to increase my comprehension so I could show I was at the advanced level. After two weeks, I was promoted to the advanced group. If I wasn’t in the growth mindset atmosphere I was in during Hadi School, I probably would have never worked towards improving myself. Hadi School has always instilled a growth mindset in its students to make them the leaders of tomorrow.

Hadi School of Excellence gives you a positive Islamic environment. I was able to get a strong Islamic foundation by going to Hadi School which made me a stronger Muslim when it came time to graduate. When you go to a school with people of different religions, it can be challenging and the urge to conform is persistent; however, Hadi School gave me a strong backbone in my deen which makes me resist the urge to assimilate and be proud of my religion.

It’s hard to be grateful for something when you don’t know how your life would be without it. I know that when I was in Hadi School I couldn’t wait to go to public school. It wasn’t because I wanted to leave, but rather because I wanted to see what a public school was like and I thought it would be better. It wasn’t. Hadi School offers personalized learning and high quality of Islamic Education. Not a lot of other schools can say that about themselves. I would give three points of advice to current students. The first one is to count your blessings. Looking back, my entire experience at Hadi School went by in a blink of an eye. At Hadi School you don’t just go to school with classmates, you go to school with a community, a family. Second, always try your hardest. It doesn’t matter what outcomes you yield. Make sure to fight for what you want, and put the effort in so that you always know that you tried your hardest. Lastly, have fun. Obviously don’t go too crazy with it, but this is the time where you’re going to be making some of your best memories. This is the time where you’re going to be building your community, your support system, your family, so have your fun… Just not at the hands of your schoolwork.

Congressional Debate- I am currently the captain of my congressional debate team at my high school. Congressional debate is an aspect of debate that acts as the U.S congress and debates the effectiveness of potential policies. I have competed at the local, state, and national levels. In my Sophomore and Junior years, I have gone to IHSA state, and in my junior year, I was able to qualify as the second alternate for Nationals.

Varsity Soccer- I have played soccer since my sophomore year in High School. I have also played for a private league, Umoja. I have played in meets and Tournaments going from local competitors to international.

Class Board Officer- I have been apart of my class board my Sophomore and Juniors years of high school. This includes planning events, games, and fundraisers for my school.

Political Action Club- I am currently the leader of the political action club at my school. As the leader, I educate the club members on timely political and social issues in the status quo and figure out how to resolve those issues by resolving them in our own school. We encourage students to vote and educate them on policies in place.

Scholastic Bowl- I have been a part of my school’s Scholastic Bowl team since my Sophomore year of High School. I have competed at the local and state levels. Scholastic Bowl is a team of students that answer questions on a wide array of topics in a competitive manner with surrounding schools.

Leadership roles within the community

Children of Abraham Coalition- The Children of Abraham Coalition is a 501c3 organization in Chicago, IL. The COAC works to promote interfaith dialogue to fill the world with Peace. I have been on the board officially since 2017, but have been active in the organization’s programs since it’s founding in 2010. In 2017 we went to the Parliament of World Religions to spread our message, the world’s largest Religious Conference.

Hadi School Summer Camp Teacher- Being a Hadi School Alumni, it is of high value for me to be able to give back to the school that has given me my foundation. In the summer of 2020, I have been able to teach current Hadi School Students online in English and Islamic Studies.

AlBaqee Organization Social Media Team- The Al Baqee Organization works toward fighting off Saudi Arabian Oppression in the case of the destruction of holy shrines located there. Being on the social media team allows me to reach more people with our message to get the word out about this initiative.

Teaching Math to Underprivileged Kids- During High School I volunteered at Mathnasium as a tutor on a grant. This grant was in place so that families that couldn’t afford a private tutor, could still get personalized education.

How are you a contributing member of society?

I contribute to society through Information. I try to inform myself and others on worldly issues by giving speeches and spreading awareness of issues. I do a hefty amount of work in political sciences in order to encourage others in activism for a better tomorrow.

Which of the skills taught to you in Hadi School has helped?

One of the main things that set a Hadi School student from its surrounding schools students is their communication skills. Hadi School doesn’t only make sure that they are making leaders of tomorrow but also leaders that can express their points and communicate effectively. Hadi School students are able to conduct speeches without a stutter at such young ages, which is simply unheard of at other schools.

What role did 7 habits play in your life after leaving Hadi School?

The 7 habits are another foundation skill that is implemented at Hadi School. The 7 habits give me a better strategic front when given everyday problems. When I was in Hadi School, I referred to them as the 7 pains in the neck; however, like most things you realize the significance when you are older. I didn’t realize the fundamental skills I was obtaining with the seven habits, but it has given me skills that I use to this day and will continue to use throughout my life. Use the below button to fill out a form where we keep you up-to-date on updates and information about Hadi School!

The Hadi School NFP admits students of any race, color, and national or ethnic origin to all the rights, privileges, programs, and activities generally accorded to made available to students at our school and does not discriminate on the basis of race, color, and national or ethnic origin in administration of our educational policies, admission policies, scholarship and loan programs, and athletic and other school-administered programs.
Copyright © Hadi School of Excellence. All rights reserved.
Design by Salam Stock